Naked Kombat’s August 13 release features the return of Jimmy “The Bulldozer” Bullet battling hardbodied hunk Nick “The Contender” Capra. Nick instantly sets me firing on all cylinders. Jimmy starts the pre-kombat interviews. This is the point at which the opponent is told to stand in the background silently, letting the fighter in the foreground answer the questions tossed from off camera. I don’t hear a word that Jimmy says because Nick is stealing the scene in an instant. He shifts from foot to foot. He looks down at his smoking hot body, clearly enjoying what he sees. Jimmy is probably trying to sound intimidating (not that I’m listening), but Nick’s perfect response is to roll his eyes and stare at the ceiling a while. Wordlessly, Nick’s body language communicates a well-formed, 3-dimensional character. He’s fucking proud of his tanned, hard body with hairy pecs and fantastic bubble butt, and he’s supremely confident, cocky even, in his chances with pale rider Jimmy. Not even the legendary Rusty Stevens managed to telegraph so completely the fully formed persona of a contemptuous heel before ever opening his mouth or slapping on a hold.

When asked how they prepared for the match in the pre-kombat interviews, most NK pornboys say that they worked on cardio, lifted some weights, had a good breakfast. When it’s Nick’s turn to answer, he says that he worked pre-match preparation with his Jiu-Jitsu trainer. Um, Jimmy?  This is going to be a long day for you.  I had been titillated by Jimmy’s promise that he’d ride Nick like a pony in victory, but I’m not holding my breath now. 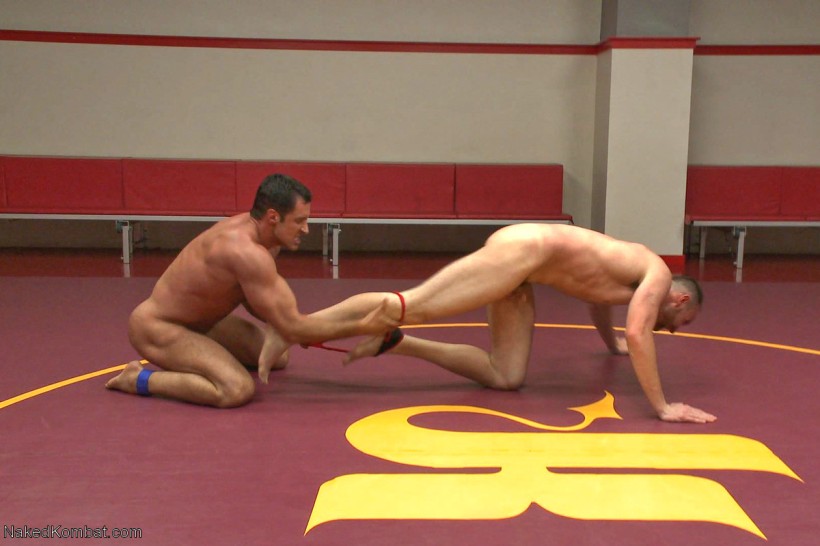 I believe Nick’s claim to Jui-Jitsu training. Early on there are several moments where it seems clear that he’s barely restraining himself from delivering what would surely be knock out strikes, managing to stay within the low impact rules of NK. Thus hamstrung, Nick finds Jimmy keeping pace as they initially jockey for position. Jimmy is the first to manage to rip his opponent’s trunks off (which counts for NK points toward final victory). Nick occasionally looks like he’s focused more on form and finesse, which slows down the action. But soon enough, the match belongs entirely to Nick.

Oil. I have a deep, lustful nostalgia for oil wrestling. I wish more contemporary homoerotic wrestling included soaking two hardbodied, fully aroused hunks in baby oil. NK still pull this device out on occasion, and I LOVE the look of these two hunks glistening under the lights. Nick is tanned, with hairy pecs. He’s dark and handsome. He looks like a Tony Soprano henchman who’d model for men’s cologne on the side. Jimmy is pale with a ginger beard and closely cropped dishwater blond hair. He’s long and hot and I’m sure my knees would go weak if he gave me second look across the bar, but damn it all if he doesn’t look merely mortal side by side with badaboom Nick. 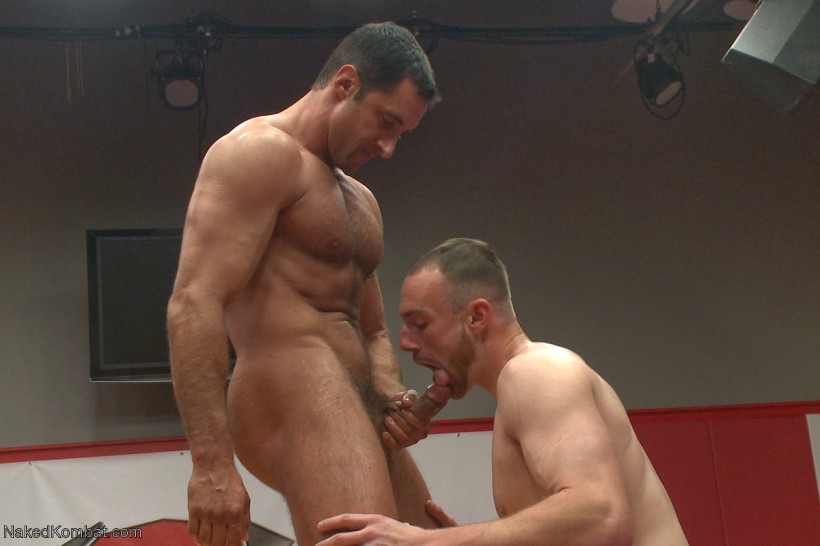 As I’ve said many times before, I tend to fast forward through much of the NK sex rounds. But I pushed pause and rewind a lot this time. Nick wins by a landslide. I really was trying to pay attention to the final score, but there was Nick, fully aroused, pumped, and consuming my attention. He quickly grabs Jimmy by the head, forces him to his knees, and makes the loser start sucking his cock. Honestly, watching guys suck cock isn’t nearly as satisfying for me as an OTK backbreaker, for example, but fuck me, Nick is such a work of art I’m pretty entranced by this visual. He’s shaped like a comic book superhero. That glorious ass, narrow waist, and thick pecs cut a gorgeous profile.

My speedometer hits 100 when Nick drags his prey up to his feet and lifts his right hand behind his head. Hungrily, eagerly, Jimmy starts licking Nick’s pit. If it was intended to be humiliating for the loser, Jimmy’s eagerness nips that in the bud. And my full-on identification with Jimmy here makes this a powerfully authentic moment, as he engages in unadulterated muscle worship. 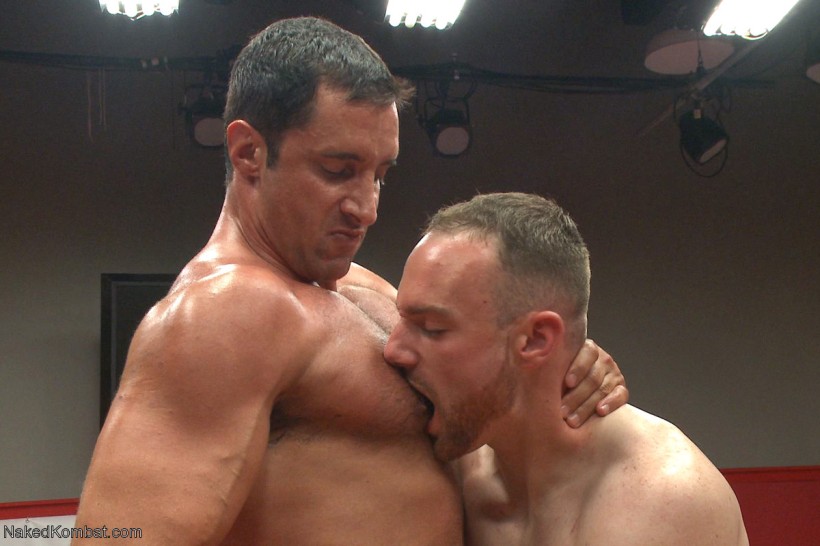 Part of the reason I fast forward through NK sex rounds is that they often read as so entirely scripted, but there’s something about the muscle worship vignette here that sells me hard. Jimmy goes to town with his tongue on Nick’s hot, hairy pecs. The closer he gets to Nick’s nips, the more eager Nick becomes, momentarily flipping the script as the winner commands, with a barest hint of pleading, for Jimmy to suck his nipples. Jimmy obeys, and Nick’s head rolls backward in ecstasy.

Nick is grooving hard on having his nips serviced. He demands that Jimmy bite his nipples. When Jimmy really bears down on the mouthwatering feast, Nick groans. There’s a moment when they both appear transported. They both look like they’re consumed in total ecstasy. Neither pornboy would want to be anywhere else in the world at this moment. I buy it. I buy it. I buy it. What a sell! 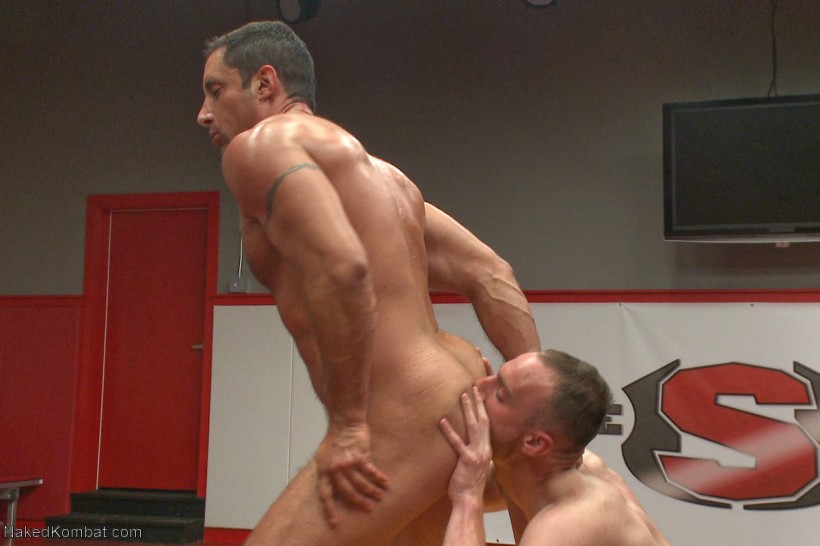 Nick and Jimmy are both gracious and sweet in the post-match interviews, which somehow makes the total sell in the sex round that much more amazing to me. Awesome entry into homoerotic wrestling entertainment. And Nick Capra could OWN this industry if he wanted it. Here’s hoping!

One thought on “More than a Contender”