Truly fanatical readers will remember that pretty much the first topical post on this blog was entitled “Wet Newsman” and featured big, beautiful Chris Cuomo in a tight white t-shirt getting soaked to the skin in a dunking booth on GMA.  I was hoping that was the start of much more gratuitous beefcake on morning television, because the sight of Cuomo’s thick, round pecs plastered seductively in that soaked t-shirt made so much bad news better.  You also know that I frequently chase my homoerotic wrestling imagination down newsboy rabbit holes, translating news desk beef into my fondest full contact wrestling scenarios. One hot hunk behind the news desk who has managed to evade my every effort to track down shirtless shots of is the new evening news anchor for ABC, shoulda-been-an-Abercrombie-model David Muir.  I think David may be feeling the heat from junior correspondent and bulging beefcake Gio Benitez releasing a shirtless shot a few months ago, because today Muir joined the rest of the GMA cast (David’s filling in for Stephanopoulos), in the so-called “ice bucket challenge” for ALS.  He’s not the first muscled newsboy to use the gimmick to tease his bulging pecs and pursed nips, but I’m not one bit less titillated that he went for it. As is prerequisite, he flexed hard in anticipation of the ice cold water, then just watch his shirt suck to his pecs and go transparent… 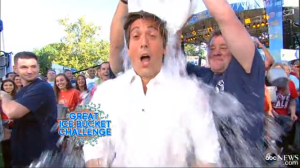 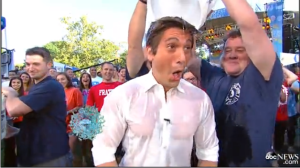 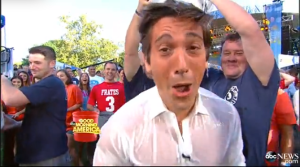 I like to think that’s the face he makes when he’s rolled an opponent up in a small package and slapped down a gloating, taunting 3-count pinfall. While I’d still offer a bounty on a legitimate shirtless shot of this stud puppy, I will nevertheless soak in the sight of his hot pecs finally visible beneath the saturated transparency of his dress shirt. As I strongly suspected, David’s got a beefy chest. Which transports me back to that wrestling moment I wrote about a few days ago. You know, the one where I left off with a friendly tussle in the wrestling ring between good natured David and Gio turns serious on a dime, leaving David’s screams of anguish muffled with his face buried beneath Gio’s muscled glutes as the junior newsboy does his best to rip the senior anchor’s balls off.

David arches his hips high in the air, simultaneously trying to lift Gio off his face.  The effort makes the junior newsboy rock backward, but he rights his balance quickly and leans forward to avoid being unseated entirely. Even with his face buried in the beefcake’s ass,  David knows exactly where his opponent’s body is at all times. So as Gio leans forward, David lifts his left knee sharply, crashing viciously into the Gio’s face. The stunned correspondent releases David’s balls and cups his throbbing nose in shock. When he pulls his hands away, he sees blood. “You broke my nose!” the young hunk gasps disbelievingly. David takes advantage of the youngster’s shock to twist to the right, rolling his shoulder off the mat and tipping his opponent to the side. Gio rolls left, quickly climbing to his feet, but the veteran smoothly grabs Gio’s left ankle and sweeps his legs out from underneath him. Gio’s back hits the mat hard, and half a second later David is on top of him. The anchor grapevines Gio’s legs, yanking them wide. He pins Gio’s left arm between their torsos while wrenching his right arm hooked behind his head.  Holding Gio’s right arm locked in place with one hand, David uses the other to pound 3 brutal pec punches that make Gio’s heart skip a beat.  The kid gasps in agony, his jaw hanging open soundlessly as his head rolls backward. As David dismounts, he drags his junior colleague up by the hair with him.  Gio is wobbly on his feet. His left hand clutches his right pec, which still has bright red fist prints on it. Smoothly, David hooks his right arm between the stunned stud’s legs and hoists Gio off his feet, cradling his beefy bod momentarily across his chest before dropping violently down to his left knee, pounding Gio’s lower back across his outstretched right thigh. Gio wails like a wounded animal as his captor holds him bent backward across his knee. “So you like playing with balls, boy?” David snarls angrily. He slides his long fingers inside his opponent’s trunks, his hand slowly enfolding the youngster’s prominent bulge. David’s lightly hairy forearm flexes, and a half second later Gio screams.

…at least, that’s what I imagine….

One thought on “Wet Newsmen”