Thanks for those checking in on me after not posting for a couple of weeks.  Exciting times in the Bard household these days, including an imminent relocation of chez Bard. I’m certain there will be more disruptions in my posting schedule over the next few months as I happily move to greener pastures, but in the mean time, let me make up for lost time and applaud the winners of the 2015 BG East Besties.

In the individual wrestler categories featured winners who were certainly odds on favorites, as well as what I consider a couple of upset surprises.  First, as for surprises, I think Jake Jenkins’ successful defense of his title as Top Babyface is a surprise mostly because JJ simply wasn’t prominently featured in 2015.  Not that I haven’t fucking adored JJ from day 1, but honestly I figured more prolific wrestlers would have been more on the mind of voters.  But JJ proves once again not to underestimate his petite, acrobatic, sensationally hot body or beautiful face.  And Kip Sorell stole Best Abs from Z-Man!? Holy fuck, that blows my mind.  I’d dip all 5 nominees in chocolate sauce and lick them clean, mind you, but Kip’s relatively low 2015 profile paired with Z-Man’s ferocious fan base has to make this a major upset.

Not so surprising are tried and true chart toppers like Best Butt award winner once again, Kid Karisma.  It’s hard to argue with perfection, although Ty Alexander pulled out a runner up for the category, and he’s sworn on FB to claim the title in 2016. Also not surprising me at all is Pete Sharp slapping down the competition for Best Bulge with his his monster package. I think that anaconda could be a gimme anytime Pete’s in the mix.  Best Body went to Chace LaChance, which I think is entirely understandable, though I’m glad to see Kid K pulled into 2nd place.

Top Heel for 2015 was Guido Genatto, which is hard to argue with, despite my selecting Joe Mazetti for my vote. Guido’s multiple, overwhelming heel performances in 2015 would be tough to beat by anyone at any time. Top Jobber went to fan favorite Ty Alexander, who was my pick and, I think, a shoe-in for his multiple matches jobbing like the cream of the crop. Debut of the year was a tough call, but I’m pleased that my pick, Biff Farrell, slapped Drake’s pick, Chet Chastain, down like a bitch to claim the title. I still say with a debut year like his, Biff could own this industry in a couple of years if he wanted it.

For the collaborative titles (at least, those requiring more than one wrestler to qualify), there were again a few surprises, at least to me.  The Submissions 10 match featuring Cameron Matthews and Zach Reno came out of nowhere to take the trophy, as far as I’m concerned. I’m seriously shocked Jonny & Stone didn’t get the nod from submission fans. I’m also surprised and a little perplexed that the winner of Best Match Overall for 2015 was Guido and Chet’s Fan Fantasy 3 bout, despite that same match only coming in second place for Best Ring Match.  If one were to assume that voters were consistent in their voting, I think that would have to mean that a good portion of those who voted for Blaine and Cameron’s Barefoot Babyface match as Top Ring match felt that whatever their top mat match pick was was better overall.  Still, I find it intriguing that Best Overall Match was not the best match in its category. 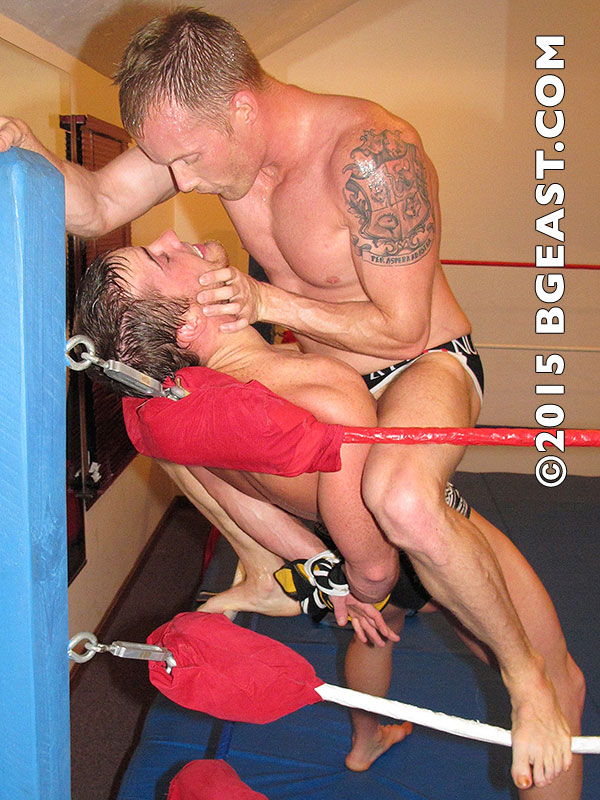 Drake made a big push in our discussion about the nominees for Blaine and Cameron’s Barefoot Babyface match, and I’m not surprised it snagged the Best Ring Match title. Hot, shocking, sensationally sexy stuff. Similarly, I’m unsurprised that Ring Releases 2 pulled out the victory for Sexiest Match, even though my vote went for X-Fights 39 (which still pulled a respectable second place). I’m a little thrilled to see Kid Karisma and Marco Carlow’s Undagear 23 match do so well, winning Best Squash and coming in 2nd for Best Mat Battle.  My vote still went for Lane Hartley and Richie Douglas brutally once sided babyface mauling for Best Squash, but Kid K and Marco definitely deserved some lauds and praises for that match. The Hottest Liplock of 2015 appeared in Ring Releases 2, meaning it was Kayden Keller’s face sucking on Ty Alexander that turns fans on most last year. That Skrapper and Christian Taylor came in second place surprises me a little, but Christian certainly deserves the reigning title as resident Kisser at BG East these days, so a second place finish for him makes sense

Congratulations to all the nominees and especially the winners. It was a rich, deep bench to call up in 2015.  The extramural, cross production competition seems to me to be heating up these days (note Cameron throwing shade on FB about the Besties on his way to promoting his own productions these days). But when it comes to full on, unapologetically gay-oriented wrestling with sensationally sexy action and beautiful bodies abounding, BG East remained the most prolific, diverse, and entertaining, by my estimation. I keep waiting for Can-Am to really reinvest in buying back their stake of the explicitly gay wrestling scene (though they definitely maintain a major claim on the wrestling-foreplay porn narrative), and/or some new production to seriously compete with BG East for the unapologetic eye to gay pro wrestling fans. But as of the close of 2015, I think that market is unquestionably dominated by BG East. It was definitely a great year for a great company and a fantastic battalion of beautiful wrestlers.