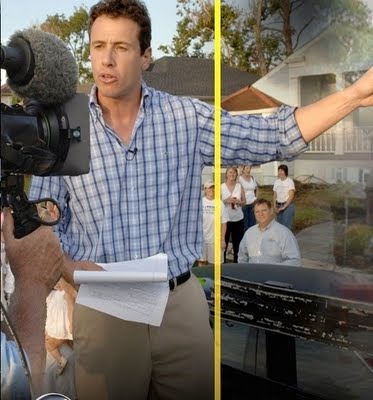 I’ve restrained myself from commenting on the DRAMA at GMA for two weeks. Those of you sick of me talking about it: tough crap. I know what I like when I see it, and I like seeing Chris Cuomo every weekday morning. 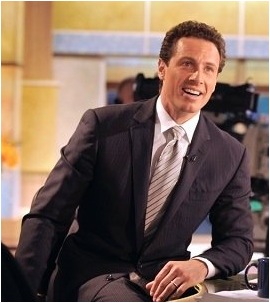 You know the line from Steel Magnolias… if you don’t have anything nice to say about somebody, come sit next to me. Well… anonymous GMA “staffers” last week were quoted as having suggested that Chris Cuomo’s interview with Chaz Bono (F-M trans guy who’s the son of Sonny Bono and Cher… keep up…) was something that George Stephanopoulos couldn’t pull off. You know I’m loving that trash talk! The Business Insider poo-poos the suggestion that George couldn’t let his hair down to have a meaningful on-air conversation with an F-M trans dude. I respectfully disagree (those assholes). George looks uncomfortable discussing merely domestic politics without mentioning geopolitical implications. Cooking with Emeril and talking hormone replacement with Chaz is not something that George is ever going to make entertaining. And besides, we need to think of Sam. I don’t think Sam Champion could emotionally cope with no longer picking out neckties for Chris in the morning. 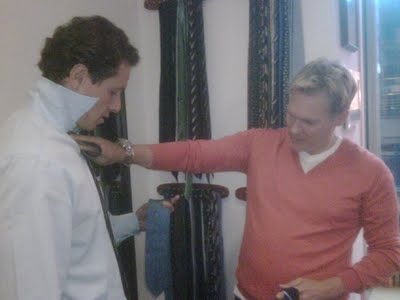 Those assholes at The Daily Beast (nothing personal… I just get pissed when I get bad news) are reporting that the tide is turned and the GMA anchor spot is George’s. The Beast also says that Chris is running in second, and if negotiations with George fall through, Chris is likely to get tapped. So one of two things needs to happen now. 1) Something really, really bad needs to befall George (I’m not wishin’ it… I’m just saying…) that stunningly drops him out of the running (like he loses it on air and rubs Adam Lambert’s face in his crotch, say). Or 2), just as fine with me, something really, really fantastic needs to happen to George that makes the GMA anchor seat seem like chump change. Can someone please convince him to run for office, or give him the news that his wife going to have quintuplets… anything?

As I’ve mentioned, in my mind the most reasonable way to settle this ponderous decision is a no-holds barred battle royale. And since we’re discussing my mind, I’ve already written that story, and George is unceremoniously thrown over the top ropes, leaving Chris winded and coated in sweat, but indisputably the winner. 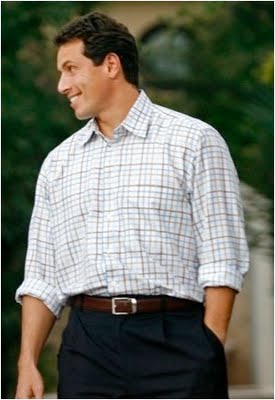 Times a-wastin’, and we haven’t heard yet who’ll be replacing Diane Sawyer when she leaves Good Morning America in January. I know. I know. Some of you don’t give a damn. So write your own blog. I’ve got a dog in this fight, and his name is Chris Cuomo. 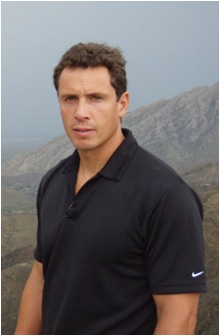 The astonishingly non-scientific-to-the-point-of-meaningless AOL poll on the subject asked readers who should succeed Sawyer. The AOL Television article reporting the chances of the contenders argues that George Stephanopoulos is “less stiff and easier on the eyes than Cuomo.” What… the… fuck? Excuse my language. I save up such words for only rare occasions of mind-boggling, inconceivable outrage. This, I assure you, is just such an occasion. 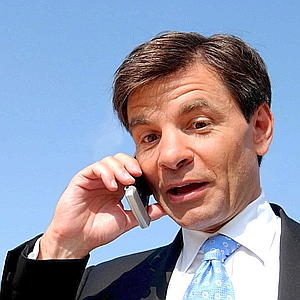 First of all, let’s start with the “less stiff.” Putting aside the adolescent jokes that spring to mind (as in, let me see both of them with stiffies and I’ll be the judge of that), let’s consider: D.C. George is never sans suit coat and tie. He’s nearly always sitting behind a desk, and when he’s not, he looks completely awkward, with his feet barely touching the floor in the lounge chair they use for interviews on GMA. I’m not a height queen by any stretch of the imagination, but I’m just sayin’… George straining to touch his tip-toes on the floor vs. Chris tearing out dry wall on a construction site. Whoever the hell said George is less stiff than Chris is smoking crack.

And speaking of smoking crack, let’s move on to the 2nd assertion that George is “easier on the eyes” than Chris. True confession: I was in love with George from his first press conference in the Clinton administration. I would have never left the balcony of my apartment if I’d lived with Rachel and Monica and could look into George’s window with binoculars. I would NOT kick him out of bed for leaving crumbs.
But let’s return to planet Earth here and reconsider the proposition that the 5’6″, 48 year old, skinny Greek is somehow easier on the eyes than the 6’3″, 39 year old Roman god who goes fishing shirtless. You knew I was going to bring up the fishing pics, so let’s just get on with it. I dare George to stand shirtless next to Chris, and let’s see if we can find anyone who could, in their wildest dreams, suggest that George is easier on the the eyes. Personally, I’d lick them both from head to toe (going slowly, particularly around the middle), but I’d start with the Greek appetizer before moving onto the the Italian entree’ that I’d be really waiting for.

Back to that astonishingly non-scientific-to-the-point-of-meaningless AOL poll. Despite the author’s assertion that the obvious choice is George, let’s re-examine the evidence. As Mediaite points out, AOL’s own poll shows Chris is the readers’ choice! Huffington Post’s poll agrees (thanks in part to me finding every computer I can sign onto so that I can register multiple votes). And in an entirely impartial contest in my wrestling fiction, George was suplexed over the top rope in a battle royale, leaving Chris to claim the anchor seat as his prize for beating his four challengers.
So the freakshow at AOL Television needs to print a retraction, and the puppet masters at ABC News need to do the right thing, the only thing, really, that makes a bit of sense: name Chris Cuomo the new co-anchor of GMA… and then send him on assignment to a nude beach, incognito.
October 22, 2009July 1, 2013 wrestlebardLeave a comment
I need help. Seriously, I know someone out there reads this blog. I never ask you for anything in return, now do I? But I’m asking. This is serious.
Huffington Post is running a poll regarding who should replace Diane Sawyer at Good Morning America. Generally I’m for democratic principles. But this is about Chris Cuomo, and in that case I am not above stuffing the ballot box. 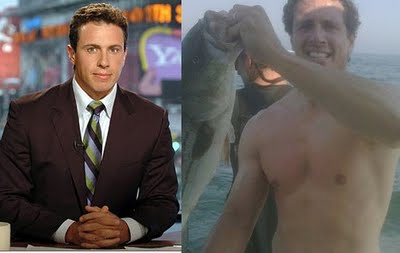 The good news is that Chris is ranked #1 so far among the top 5 “candidates” being considered. The bad news is those bastards at city file are spreading the horrific rumor that Chris is slated to move to 20/20. I don’t know that even Chris could get me to tune in at 10 pm on a Friday evening to watch the snoozefest at 20/20. There MUST be a groundswell of mob rule demanding that he both stay on GMA and take the anchor seat. 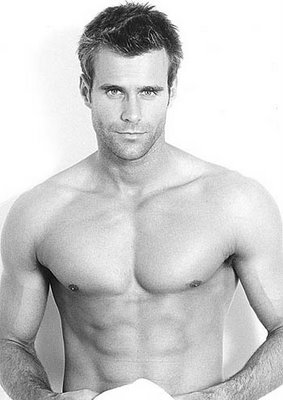 Bizarrely, Cameron Mathison is #2, riding his qualifications as a former soap-opera star, Extra Entertainment “news” correspondent, and Dancing With The Stars flunky. Seriously, now. He’s gorgeous as hell, but one of these things is not like the others!

Speaking of the others, David Muir is ranked #3, as of my writing this. David is both competition for Chris in being an actual newsman and in sex appeal. David must be destroyed. 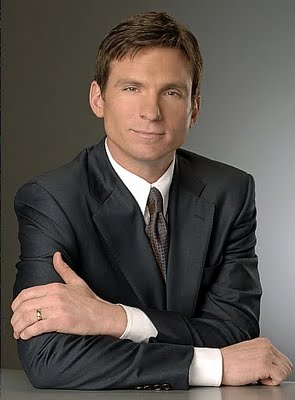 Bill Weir is ranked #4, where he should be. Bill is handsome and quick-witted, distinctly not as sexy as either Chris or David, but he’s been with ABC News for a while. 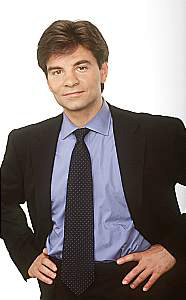 Shockingly, George Stephanopoulos is in last place. He filled in for Diane this morning, which is ominous (looks like GMA is taking the merchandise out for a test-drive). But why would George want the job? Face it, morning “news” programs in this country are only vaguely “news.” Seeing George ham it up with Jamie Oliver the Naked Chef over his recipe for pork loin just seems… well, demeaning for George Stephanopoulos. He should leave the demeaning fluff news (as in the anchor of GMA) to pretty boys who don’t mind. Like Chris Cuomo.
So I’m here to get out the vote. Vote now! Rank Chris #1. Then move to another computer and vote again.
Perhaps more importantly, I believe this is an absolutely perfect set-up for my wrestling fiction. I’m feeling a battle royale coming on. Five newsmen stripped to their trunks, last man standing in the ring gets the anchor chair. Hardbody Cameron has got to experience some fantastic suffering for presuming to get into the ring so completely outclassed. Okay, so the outcome may be a bit predictable, but I promise I’ll make it spicy!