Skip to content
August 9, 2010July 1, 2013 wrestlebard4 Comments
According to Greek mythology, Narcissus was a devastatingly beautiful and proud mortal man who disdained those who loved him. When Narcissus glimpsed his own reflection in a pool, he was captured by the sight of his own beauty and slowly died unable to tear himself away from adoring his image.

It’s an ancient tale that survives today because it says something that’s timeless. Narcissus is a morality tale, most genuinely, warning against excessive pride and self-worship. On another level, it’s a story about the way things are at the heart of the human condition. We praise beauty. We idolize and idealize the beautiful. We worship beauty, and those in possession of an overabundance of socially reinforced standards of beauty fail to surprise us when they are clearly wrapped up in their worshiping within themselves that which others prize, praise, and worship in them.

Confession: I’m a sucker for a hardbodied narcissist who’s completely in love with himself. Sadly, that’s true in my personal life, but more to the point, it’s definitely true when it comes to the homoerotic wrestling that I dig. Self-worship is a succinct, well-trod tale in the wrestling ring. The opening scene of the narcissist soaking in the gorgeousness of his own reflection sets the table for countless battles. Sometimes the challenger arrives equally as self-adoring, and the match ensues as each adonis defends his claim to embody the pinnacle of beauty. The banter that centers around, “sure, you’re not so bad, but take a look at me!” works to establish the characters, define the terms of the contest, and begs the question of who the objective observer would select as the most beautiful of the beautiful. A delightful alternate ending to this tale is when both beauties are so evenly matched that slowly, eventually, the competition turns into mutual muscle worship. 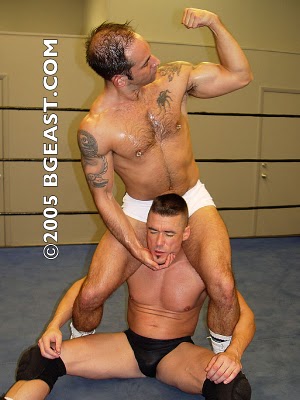 Sometimes, the narcissist is met by a challenger less concerned with his own self-worship and more incited by contempt to attack and tear down the work of art before him. The battle is its own morality tale, determining the superiority of the aesthete or the athlete. When the phrase “pretty boy” pops up frequently in the ring, we see the psychological struggle to determine who is the superior man: the one with the stunning proportions and classic beauty, or the one built of rougher stuff filled with determination to mess up his opponent’s beautiful face. This story works swinging either direction, as far as I’m concerned. I’m no less a fan of the pretty boy beatdown than I am of the I-told-you-so narcissist victory. 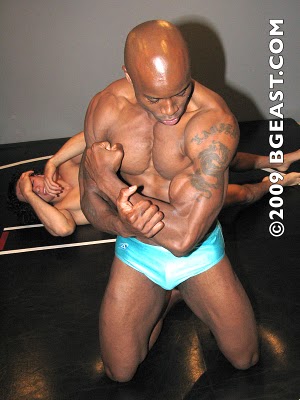 The narcissist in the ring is a character that typically works for me. It’s probably a profound character flaw in me (which would explain a lot of my dating history), that I find a man deeply in love with the sight of his own beautiful body incredibly arousing. Now I’m completely engaged by a muscled stud who poses proudly to awe and intimidate his opponent (and you and me). But the hot side of beef who is stunningly beautiful, knows he’s stunningly beautiful, and just a little awed and aroused by his own stunning beauty, is a character I’m tragically drawn to.

I think it’s no coincidence that both Lon Dumont (my reigning favorite homoerotic wrestler – nonpornboy) and Mr. Joshua Goodman (top contender for Lon’s title) are fantastic self-worshipers. Lon’s compact, competition-ready musclebod is sufficient to give me whiplash, but Lon’s delight in looking at himself propels him to the heights of homoeroticism in my book. Mr. Joshua is probably even more the epitome of the narcissist enamored his own gorgeous, crafted muscles and overabundant endowments. Win or lose, Joshua’s role is the stunning muscle stud who genuinely, passionately adores his own fantastic body and is ready to deploy his painstakingly toned muscles to demand from any opponent their concession to his superior beauty. It’s not hard for me to imagine that when Joshua’s eyes are closed in that moment just before orgasm, the image that fills his imagination is his own classically proportioned naked body.

I believe my pathological arousal for a self-loving hardbody probably also explains why Rafe Sanchez manages to keep rising to the surface of the homoerotic wrestling matches in my cue. Any and every match that I’ve seen with Rafe prominently features a healthy dose of Rafe self-love. Even when his opponent’s engage in Rafe-worship, it seems to only fuel Rafe’s arousal even more as he marvels at every beautiful inch (and he has plenty of inches) of his hot, tight body. And the more Rafe adores his gorgeous proportions and flexed muscles, the more I’m entirely at his mercy.

Even short of full on, characterological narcissism, just a lingering gaze a muscled wrestler gives his body is a major plus in my book. A classic babyface hero who can’t help but pause and marvel at his own massive bicep (Mitch Colby, I’m looking at you) is astonishingly erotic. In fact, I’d say that what gets plenty of people in the world diagnosed with a personality disorder is the very same thing that puts at least 75% of the homoerotic into my favorite homoerotic wrestling. So bring on the self-worshiping body beautiful muscle hunks in awe and obviously aroused by the sight of their own stunning bodies… I just can’t help myself.
December 1, 2009July 1, 2013 wrestlebard2 Comments

I used to lust after Lex Luger guilt-free. Lex could probably qualify for an installment in my “What Turned Me Gay” series, but honestly, I knew that I was gay and happily nurturing my wrestling kink before Lex’s standout physique caught my eye. 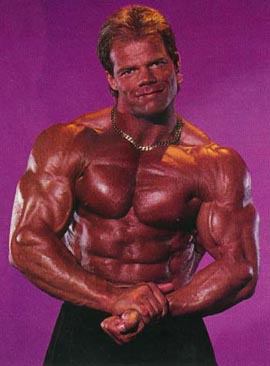 Wrestling Arsenal captures Lex nicely, characterizing him as a bully. He was at his best making lesser men scream, refusing to break the hold once the bell rang, and crunching out most musculars knowing that no matter how much the crowd booed, we we were all in awe of his stunning body.

1000 Holds recently posted a great squash by Lex. As is so often the case, the commentary is undisguised body worship. 1000 Holds has helpfully highlighted the most blatant body worship dialogue with pop-ups (I love pop-ups). My favorites are “He has literally bulldozed his way through every top wrestler around,” and, “Luger is just the much larger of these two… 30 inch thighs!” Seriously, he knows the precise measurement of Luger’s thighs. These commentators are hot and bothered by body beautiful Lex, and their patter makes this squash match about much more than just a three-count pin. This is about worship at the feet of a muscle god.

At some point in the 90’s, Lex started to turn into his own plastic action figure. I’m not sure what cocktail makes the big boys lose definition and look completely plastic, but it’s a shame. Of course, it’s not as much of a shame as being arrested with intent to distribute. And of course there’s the shame of introducing your girlfriend to the recreational drugs that ultimately killed her. Then there’s the shame of desperately turning über-Christian and blaming “Satan” for your dumb ass, self-destructive, literally narcissistic choices on your way to hocking the magazine you write for (I’m really fine with religion, but I can’t tolerate the Christian-capitalist marketing machine).

I don’t mean to second guess anyone. If Lex is a happy camper, more power to him. As for me, I like to remember Lex from around 1990, when he was still serving Satan, turning me (and clearly more than a couple commentators) on, and telling the timeless story of a muscle god destroying the mere mortals in his way.

In honor of this blog being listed on Bearhugger.net, I thought I’d pick out some of my favorite belly-to-bellies and reflect a little on the crushing embrace.

The hug as a device of torture is a sweet paradox. One man wrapping his arms around another man’s waist, in a different context, is about tenderness and affection. When those arms are cinched tight, with the recipient squeezed hard, the intimacy of the embrace turns from tender to tortuous.

The mainstream pros do it at least as often as the homoerotic pros. When the musclegod Lex Luger clamped tight a bearhug, employing that stunning musculature in concentrated focus on the small of his opponent’s back, it’s no wonder that we could see not only pain, but fear on the faces of his victims. To be lifted off your feet and crushed against the sweaty, muscled torso of Luger must have been a nightmare for many, and surely a dream come true for at least a few.

The homoerotic pros, though, make explicit what’s undeniably implicit in every wrestling bearhug: the bearhug is all about the interplay of sexual intimacy and sadistic domination. Classic Can-Amer Cliff Conlin was a master salesman. Watching the hairy-chested heel beating up on his opponents was always golden, but when some studly challenger like Dean Christian captured Cliff, lifted him off his feet, and squeezed him until he screamed, that was priceless. 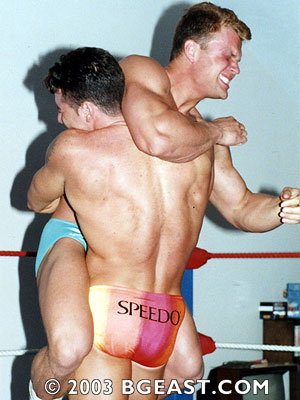 When Brad Rochelle picked to pieces Jeff Phoenix in BG East’s Fantasymen 18, the final and decisive fall was a long series of one impressive bearhug after another. Brad hoisted his man off his feet, pinned him against his pelvis, and squeezed the breath out of him until he passed out. Total control. Total domination. 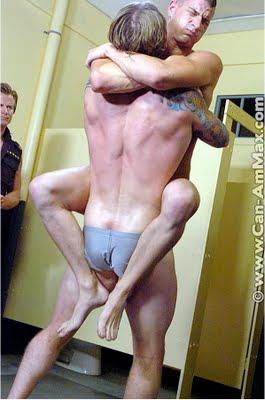 David Taylor’s repeated bearhugs on Rusty Stevens in Wrestle Bait are amazing, not only due to the ease with which David holds Rusty off his feet, but even more impressively the way that David remains hard as a board throughout. Rusty looks like he’s sitting on that gorgeous cock of David’s as it sticks out from between Rusty’s ass cheeks perched in David’s powerful embrace. Passionate suffering becomes passionate ecstasy, and the bearhug is the seamless border between the two.

And finally, I have to mention again the inspired pairing of Mitch Colby and Cole Cassidy in BG East’s Ringwars 15. Mitch’s beautiful body is flexed everywhichway as he drags Cole off his feet and lifts him high in his arms. The fantastic juxtaposition of Cole’s delicious suffering and Mitch’s cocky self-congratulations for his stunning domination makes my head spin. And what makes my head spin even more is reading Kid Leopard’s teaser that the next BG East catalog will include a Wrestler Spotlight tape featuring three matches with Mitch! Sweet mother of God, someone has heard my prayers!