Is it my imagination, or is BG East pumping out new releases (so to speak) with increasing frequency? I like the more frequent release of matches, and I love the on demand options. It holds my flea-like attention span better, and it more efficiently satisfies my need for instant gratification. 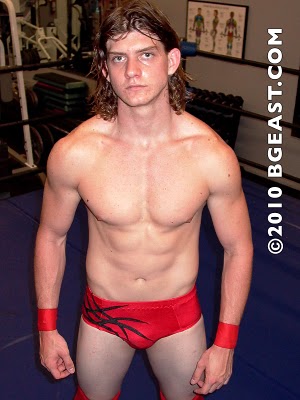 Speaking of gratification, have you seen Bobby Horton’s schooling of Tyrell Tomsen yet? This is another one of the moments when I’m happily surprised to discover that the “other guy” in the match turns out to be my new fixation. When it comes to Tyrell, I love studying his body nearly as much as Tyrell loves studying his body. I can never get enough of his naked ass in Strip Stakes 1. He’s got a beauty and a power that’s simply fantastic. I was drawn to Ring Rookies 3 to get a little Tyrell fix. What I found was Bobby Horton grabbing hold of my crank with both hands and turning it like a champ!

This is a classic tale of muscle/power/beauty versus speed/guile/skill. Both wrestlers do a nice job of telling this tale, and I’m sucked along for quite a while, unsure exactly who I’m hoping most will come out on top. I’ve only seen one other bout with Bobby, when he lays down a punk’s challenge to Mitch Colby (back when Mitch was still ranked my #1 favorite homoerotic wrestling pornboy). But against Tyrell, Bobby opens up a pro-wrestling clinic that convinces me that he is much, much (much) more than a long-haired, bright-eyed-and-convinced-of-his-own-youthful-invincibility surferboy. He’s quick, decisive, and he pieces together some high class moves that take me completely by surprise.

His frequent low-class moves are actually just as entertaining, frankly. Bobby does exactly what it takes to neutralize Tyrell’s superior strength and momentum, and then he does quite a bit more to make the big man suffer. When Bobby refuses to accept Tyrell’s second fall submission until he uses the word “quit,” I gain an entirely new respect and lustful attraction for Bobby. He has a slightly-psychotic laugh that bubbles up with increasing frequency throughout this match, as he takes obvious delight in watching his bodybuilder boy opponent laid low and hurt. He wants to not only defeat Tyrell. He wants to hurt him, and to take a nice long time watching the muscle hunk writhe on the ground, suffering.

Finally, there’s just something that takes my breath away when a massive, gorgeous, cocky bodybuilder is laid out helplessly, and his smaller opponent poses proudly over top of him. Bobby’s not nearly as big as Tyrell, though there’s nothing at all unaesthetic about Bobby’s beautiful muscles. His biceps aren’t even close to being as thick and meaty, and his pecs look nearly adolescent (if you were a gym bunny as an adolescent) by comparison. But when Bobby struts and preens, flashing a double bi and crunching out a most muscular, his sliced up muscles are exactly what the doctor ordered. He sells that incredible moment where the massive bodybuilder can only look up in shock and disbelief as his punk-ass heel opponent shows him the trim fighting-machine that brought him to his knees. I’d like to lobby for more of sadistic, gorgeous Bobby as heel in the ring, taking more BGE hardbodies by surprise and humiliating them with sadistic, gleeful satisfaction! Who’s next!?