Friend of neverland, AH, commented on my post about Lon Dumont last Friday, saying, in part:

“…I hope that Lon is as turned on by your words as you are turned on by his methodical manhandling of his opponents!”

It’s no secret that I’m turned on by Lon’s ringcraft in the extreme. I can only wish such passionate pleasure on my dearest friends. I was nursing a bodybuilder wrestling fantasy before I first saw Lon displaying his gorgeous physique in the BG East ring. In fact, bulging, expertly crafted muscles, paired with championship indy pro ring skills and a wicked sharp wit was starring in my wrestling kink imagination for a majority of my life. Lon’s arrival on the scene at BG East was an epiphany, the alignment of stars, a fantasy man climbing out of my erotic longings and into the ring. True enough, it’s only now that he’s officially my homoerotic wrestler of the month, but he owned the title long before I actually saw him leave big, sweaty Eddy Rey hanging defenseless in the ropes, watching Lon pump a sweetly peaked bicep in his dumbstruck face. 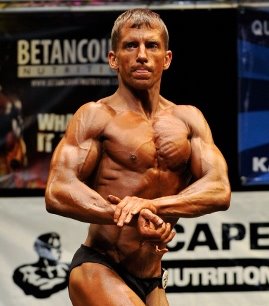 While I don’t know what’s turning Lon on at the moment, I do know that he read my latest post. I also know that he’s a genuinely gracious muscle hunk, because he generously forwarded me these pics from the culmination of months and months of obsessive physical training as he competed in several bodybuilding competitions this season. 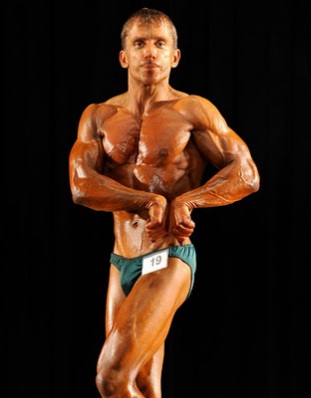 The pro tan seems oppressive for those of us unaccustomed to the particular tastes and demands of the competition bodybuilding scene. However, I’d drop a paycheck to be the one to finger paint the shiny, brown pigment across every bulge and in every nook and cranny. Reports are that Lon’s trophy case is completely maxed out after competing in multiple shows this season. His hot muscles understandably earned the respect of plenty of judges. 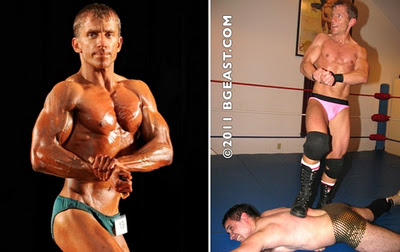 As much as his on-stage side chest pose impressed the judges, I have to say, his side chest pose in the ring, with one boot planted victoriously into the back of writhing Morgan Cruise is about 50 times more awe-inspiring for my tastes. 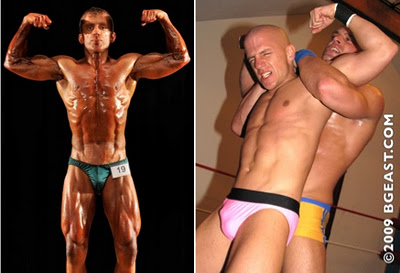 The pro tanned, slicked up sculpture of Lon’s double bicep in physique competition is hot, but the image of him lifted off his feet in a full nelson and forced to pump out the same pose in submission to beefy Eddy Rey is off the charts! 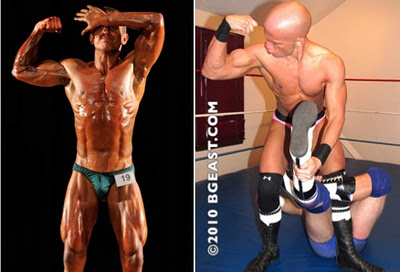 With the stage lights glistening off his obliques, there’s no denying that this single bicep shot is a work of art. But hot damn, Lon gazing lovingly at that same bulging bicep even as he threatens to snap Terry O’Daly’s knee off in the ring is simply incomparable! 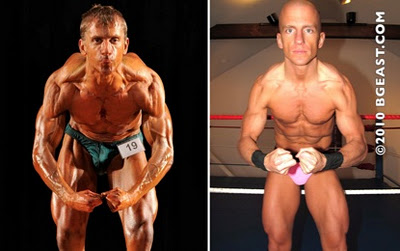 No doubt about it, I love hot, muscular, beautiful bodies like Lon’s.  Competitive bodybuilding’s insistence on slicking their muscle men up with baby oil and stripping them down to minimal posing trunks makes the sport one of the most spectacular spectator sports ever dreamed up. But anything, anything that happens under the bright lights of non-contact bodybuilding is mind-blowingly eroticized (even more) when a hot, handsome, hard muscle man is transported into the wrestling ring.  Lon would be a fantasy man based solely on his razor wit and aesthetic proportions, without a doubt. But he’s reigning homoerotic wrestler of the month because he’s all that and a sexy ass pro wrestler, too! 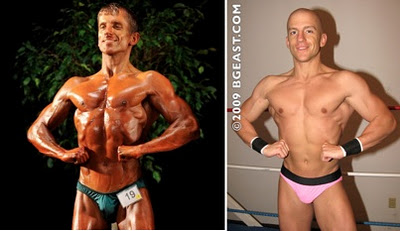 One thought on “Exceeding Myself with Happiness”