I just filled out an online survey as a BG East Arena member, giving them my impressions of the Arena content and subscription cost. It reminded me that I need to buckle down and do something that I’ve been telling myself that I need to do for some time. I need to dump a subscription. But which one? I’ve signed up for more than I really ought to, convincing myself that it’s in service of having more to review here on the blog (weak pretense, I know). But truth be told, I really shouldn’t be carrying quite this many recurring subscriptions. So let’s look at this by the numbers, and you tell me what I should do.

The BG East Arena membership is still stroking and stoking my kink quite nicely. I like the new weekly updates, even if they are proportionally smaller than their semi-monthly old updates used to be. I think I’m on the 90 day recurring billing scheme, for which I pay $34.95 for three months of access to the Arena. I’m under the impression that I get more quantity of content per penny with the Arena than I do with any of my other subscriptions (though a number cruncher may have more to say about that). I enjoy the preview pics of yet-to-be-released products, as well as the extensive galleries of new releases and “classics.” And I really enjoy the “action clips,” those little tasty morsels of a few minutes of BG East matches. BG East has also been very generous with permitting me to repost occasional Arena content here at neverland, which is extremely cool of them. I’m not inclined to put the Arena on the chopping block as I scale down my kink budget, but perhaps you have arguments for or against it?

I’m also subscribing to Can-AmMax. I believe I’m on the month-to-month recurring billing cycle, which gives me each month’s content for $19.95 (I could get 90 days recurring for $49.95). Can-AmMax is more hit-and-miss for me with regard to how into it I am at any one moment. When I’m particularly into Max releases (e.g., the first 2 Arena matches & Pro Sex Fight), I was scarfing it up and checking daily for when the next morsel would be offered. I like that I can watch entire matches, piece-by-piece, for the subscription price itself (unlike the extra charge over at the Arena). The photo galleries often aren’t always action-oriented (lot’s of posed Blue Steel stuff that leaves me bored), and the galleries don’t always correspond to new releases in a 1-to-1 relationship the way that the BG East Arena does.  I also repost Can-Am content holding my breath just a little, because though I’ve tried to figure out how to formally ask their permission to repost their content here, I haven’t been successful in receiving specific permission (if someday all Can-Am content has been removed from this blog, it’s because they must have finally asked me to stop treading on their copyrighted material). The wrestling action itself is running about 50/50 for me these days, with my sincere interest in their new releases rising only about half the time. I’d miss it if I dropped it, but I don’t know how much I’d miss it.

And yet again, I’m subscribing to Thunder’s Arena’s Thunder TV. I think I’m on the month-to-month plan with them as well, investing $29.99 recurring (I could get 90 days for $59.99). Thunders is striking a chord about as frequently as Can-Am Max (though very different chords). The wrestling, video, and photo quality are the weakest of the three, and the website itself is the lease intuitive or well-organized of anything I’m paying for. I like the personality and the personableness of Thunders. I like the humor and the big, big muscle boys. Mr. Mike has been sincerely generous in giving me permission to repost any Thunder’s content here, so they rock for that as well. It’s the coyest of all my subscriptions, with no nudity and only implied gay-themed content, which is frustrating. They do have some wrestlers that I enjoy that I just don’t see elsewhere (Big Sexy and Ace Hanson, I’ve got my eyes on you as I say that!). I’d miss the subscription from time to time, I’m sure. And this is the second time I’ve had a Thunder TV subscription, returning to the fold after a long hiatus. But it could be the low fruit ripe for picking in this bunch. 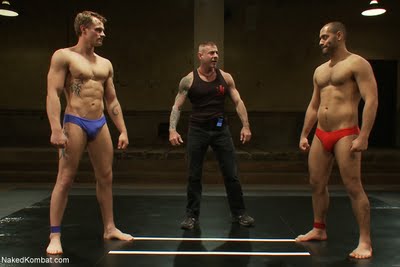 Finally, I’ve got a NakedKombat subscription for a whopping $34.95 per month, though if I was smart, I’d sign up for the 90 days recurring plan for $59.99. NK puts out exactly one new match every Wednesday that I can watch or download in its entirety, as I can any other NK match, at any time. I can also download photos of NK action from any match they’ve released, though the galleries sometimes aren’t as entertaining as in other subscriptions, nor do they have the bells and whistles and theme galleries that I enjoy elsewhere. NK doesn’t appear too worried about copyrighting their photos, so I don’t know how they feel about my reposts and reviews, but I suspect they don’t mind (wouldn’t be the first time I’m proven wrong, though). I’m into about every 2 out of 3 NK new releases, with my favorite homoerotic wrestling pornboys often showing up exclusively in this all-pornboy production (sweet Jesus I can’t get enough Trent Diesel!).  Round 4 and the victory sex interest me only rarely, frankly, since it’s the wrestling itself that really tweaks my kink the most. But rounds 1, 2 & 3 are highly entertaining and arousing for me for those matches that particularly speak to me. I’d miss it particularly for specific wrestlers that I go to for my hardcore pornboy wrestling moods.

So, surely someone out there is an CPA, MBA, financial advisor… someone with more money sense than I have. Crunch the numbers, wave a wrestling kink wand over top of them, and tell me what I should do to balance my checkbook and feel a bit better about my abundant outlay of cash in pursuit of wrestling kink.

One thought on “Kink Costs”